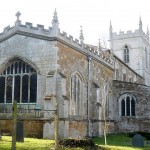 The village of Ashby Folville is noted in the Doomsday book of 1086, however the present church was founded by Maud Bassett in 1220 and was presented to Launde Priory who were the first patrons. Maud Bassett’s tomb is under an arch on the north side of the chancel which dates from 1222. The Norman front near the main entrance is the only relic from the earlier church. 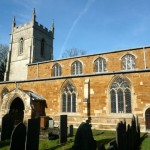 The Church is mainly constructed in ironstone, with limestone dressings and the tower and battlement frieze to the chancel are of grey ashler. In the 14th century the north and south aisles were added and the tower was built in the early 15th century with the magnificent nave roof constructed later.

There is an oil painting on the north wall at the west end of the church showing the old two-decker pulpit and the lower part of the painted chancel screens which now stand at the entrance of the belfry. The belfry itself houses an unusually large number of bells for a small village church (eight) the oldest dates back to 1637, and in 1901 five of the bells were recast, two new ones added, making the peal of eight. 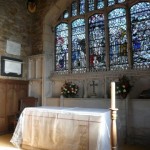 e stained glass windows are relatively modern, however very interesting, a number of which commemorate the relationship of the Smith-Carington family to the village. The west window in the belfry for example was erected in 1876 to commemorate the marriage of Herbert Hanbury Smith-Carington to Elizabeth Prince Stallard, it portrays Edward 11 and a Folville Knight and relaces an earlier window which mystically disappeared sometime after 1720. 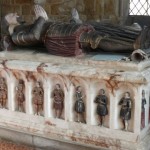 The original window was erected by Sir Eustace de Folville between 1326 and 1347 as a thanks offering to Edward 11 who pardoned him after he slew Sir Roger de Bellars in 1326 in a duel. An effigy in chain mail on a tomb chest in stone of Sir Eustace de Folville who died in 1347 can still be seen in the Carington Chapel. Sir Eustace not only killed Sir Roger de Bellars, but was one of a band of four brothers who terrorised the neighbourhood locally.

The presence of St Mary’s in the village reminds us of the faithful witness and prayers of Christian believers throughout the century, and the Church is still at the centre of village activity providing a focal point for local parishioners.

For further information please use the following addresses or send an email from our contact form here (Please select ‘St. Mary Church’ as your interest from the dropdown).

More information about St. Marys can be found at http://www.achurchnearyou.com/ashby-folville-st-mary/